These two, overspending and credit card debts, are hard to separate. Our survey of up to 70% of interviewed people found them overspent by not less than $100 each month. Slightly more than 50% also admitted inability to cover in full their credit card bills every month.

Despite all these, more than 80% of Americans are actively trying to reduce their outstanding debt burden in 2019.

Therefore, ElitePersonalFinance has updated statistics on credit card debt in America about overspending to illustrate how much consumers are fairing on.

60% of women than 35% of men do not think they can pay off their total credit card debt. It shows a shortage of confidence among women.

Midwesterners have more expensive credit card bills than other Americans, with 53% in the region having more than $2,000 in credit card debt.

The majority of Americans have debt as their dominant strain. About 85% of Americans are actively striving to minimize their debt; up to 74% of these have credit card debt in general. 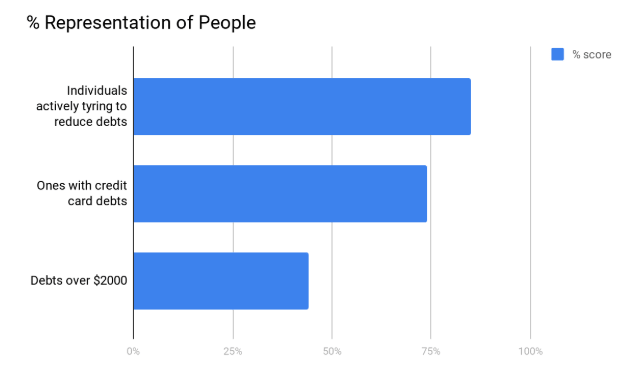 The Causes of Overspending

It may not be a topic common at many dinner tables; however, credit card debt shall never be a brim point in question. As stated earlier, two-thirds of Americans have credit card debt as we speak or in the past. Despite all, most Americans are actively trying to minimize the deficit and overspending simultaneously each month in less urgent situations. Below is a graphical representation of the top five things that Americans spend each month. 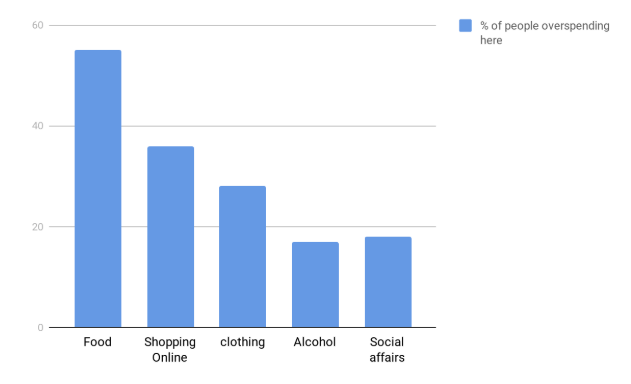 The trends illustrated by the above graphical representation cuts across age groups, genders, and regions; you should note that  Americans find it hard to hold back their spending on social activities like drinking, partying, and many fun-related cases go shopping online and clothes.

The graphs below highlight some of the differences across demographic groups as far as debt management is concerned.

Percentage of people with credit debts by age 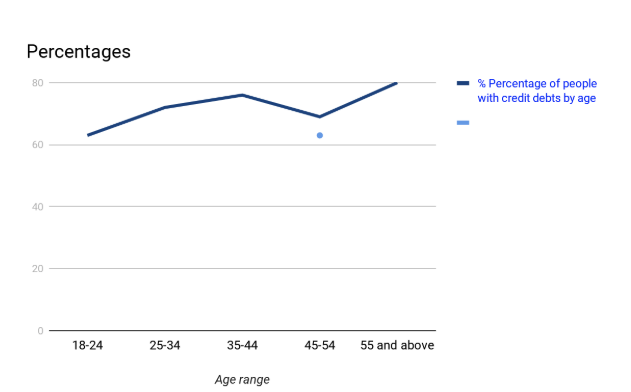 Less than 1% of respondents’ age range, 18 to 24, reported a credit card debt of more than $5,000. The average balances in that same age range were significantly lower than that of older respondents.

The difference is the outstanding balances are directly proportional to the difference in income between the two age groups. Most young people have less paying jobs, as a matter of fact. 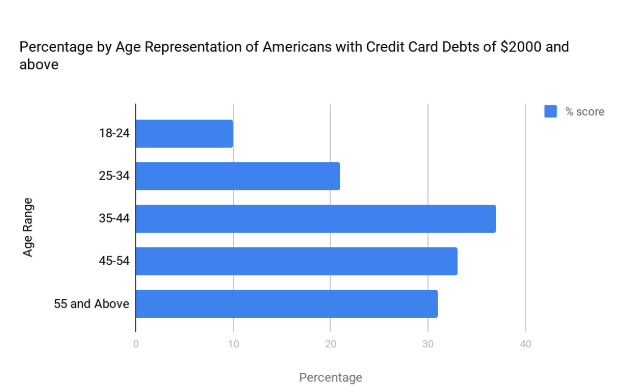 There is a level of confidence among those with lower balances to immediately pay off their debt as long as they want to complete the payments. The older respondent faces increased responsibilities like mortgages; school fees go above their credit lines because it is necessary.

Our study findings show a great deal of evenness in the two genders regarding credit card debt. Up to 74% of individuals from both sexes admitted to having outstanding card balances. From that, we learn that men and women are equally likely to carry some debt on the least.

For all that, there’s a high level of likelihood that women have larger outstanding balances, with about 46% of women reporting total credit card debts of well over $2,000 compared to 42% of men. Therefore, the average self-reported credit card debt among women is $3,484 and $2,980 for men- a deviation of more than $500.

NB “The study also found out that fewer women are in a position to pay off their total credit card debt whenever they needed to.”

Credit Card Debt by Region: Midwesterner Portrayed a Bit of Inability to Pay Off Their Debt

Region-wise, there was a little variance in the percentage of people with credit card debt. In all the five areas of the U.S., close to 70% or more of the interviewed individuals admitted to having one credit card debt at the least.

The Southeast region has the least percentage of residents having account balances over $2,000. The average incomes in this region are also lower, attributed to the outstanding card balances and lower purchasing power. On the contrary, there are over $2,000 outstanding balances reported by the Midwesterner residents.

Tips on: ‘How to Responsibly Use Credit Cards and Avoid Overspending”

There are a few obvious but often neglected tips that, when put to practice, can help you curb overspending and card debt issues. These can help put you on a pathway to financial freedom and success.

Overspending might not be so vivid; however, in the end, you might find yourself a victim. To avoid this, it will be indispensable to prepare a monthly budget.

In doing so, you need to first look at your monthly income and expenses and decide where to cut back. As soon as you note areas you overspend on, formulate a spending plan that ensures you have more money coming in than the one you spend. This way, you will be on the right financial track.

Every month, you must have a full picture of your financial health. This is done by checking your credit score at least once each month. If you want to raise your credit score, see that your utilization is below 10% and ensuring your bills’ timely payments. In so doing, you will reduce the cost of borrowing money since you’ll qualify for lower interest rates.