Safest Places to Live in Washington 2020 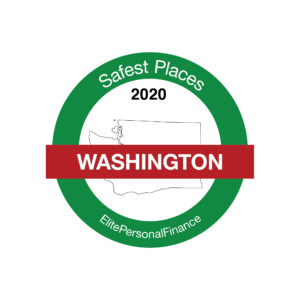 Washington State is located in the north-western part of the US. It was named after the legendary George Washington. It is the 13th most populous state in the US with a population of 7,288,000 people. The capital of Washington is Olympia (50,302 residents), whereas the largest city is Seattle.

The landscape of Washington is dynamic and eye-catching. Diversity can be seen in every corner: mountains, glaciers and bays, ocean, forests, fjords, plains, and even Mount Rainier volcano.

Crime Score in All Cities in Washington

In case your city didn’t make it to the top 30, you can take a look at our full list of Washington cities.

It is obvious that we can’t compare crime rates in small and large cities. That’s why Elite Personal Finance made a detailed analysis and divided all places in Washington into the following categories:

Is your city safe enough? Are you worried because of the crime rate in your city? Do you have any thoughts on safety levels in the country?

Safest Places to Live in Arizona 2020